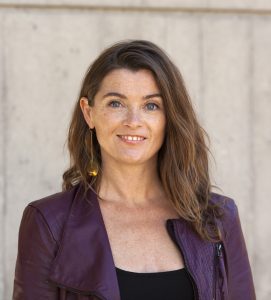 Sara McKinnon is an Associate Professor in the Department of Communication Arts. Having earned her M.A. and Ph.D. at Arizona State University, she joined UW-Madison in 2010 from the University of New Mexico. Her work is largely focused on intercultural rhetoric, globalization/transnational studies, legal rhetoric, and transnational feminist theory. Her most recent book, published in 2016, is entitled Gendered Asylum: Race and Violence in U.S. Law and Politics. She is currently at work on two projects, tentatively entitled, “Transgender Youth in Schools: An Exploration of Student, Parent and Staff Experiences” and “Violent Rhetoric: Constructions of Mexico in U.S. Media and Politics.”

An interview with Sara

I teach mostly in the Communication Arts department.  I regularly teach a large lecture course, “Communication and Human Behavior.” I also teach Intercultural Communication, Conflict Studies, and the Rhetoric of Globalization and Transnationalism.

The globalization class is a great one.  It’s an introduction to globalization and draws students from many different areas with a wide variety of perspectives, which makes it fun.  It starts with World War II and progresses to issues that are highly relevant at this time—migration, health, climate change, etc.

I also really enjoy the conflict class.  In addition to my scholarship, I’m also trained as a mediator.  I teach this course as a practicum.  It’s very hands on.

What languages do you speak?

I speak French, Spanish and English.

I learned French in college, then studied abroad in Quebec and Aix-en-Provence.  After college, I lived in France for a few years, where I worked in public relations.  The position initially started as an internship, then turned into a real job.  I returned to the U.S. to go to graduate school.

I started learning Spanish as a full-fledged adult, around 2014.  I think I’m pretty good now.  I have taken great Spanish classes several times in Cuernavaca, Mexico.  And have also done on-line study in the U.S.

What are your research interests?  What sparked your interest in this field?

I am interested in the role language plays in the world. I’m a communication and rhetoric scholar.  The language we use has material effect.

I’m now working on a project tracking the way that Mexico is portrayed as violent by Americans in the U.S. The rhetoric of violence, as it relates to Mexico, really ramped up starting in 2005. The American assumption that Mexico (and Mexicans) is violent, leads to a push to create foreign policy collaborations between the U.S. and Mexico on a host of issues including immigration, national security, and even rule of law. Messages about a violent Mexico don’t just come from politicians. Almost everything you read or hear about Mexico in this country now mentions violence in some form.

Part of this project deals with the Mexican response to this rhetoric. U.S. messages and language choices have an impact on Mexican society.

What is your most memorable research experience?

A couple of experiences come to mind.  For my prior book, I was working with the Florence Immigrant and Refugee Rights Project in Florence, Arizona.  Within the space of a mile, there are three immigration detention centers in Florence. Working with this project felt important because it was connecting my scholarship to helping people with their asylum claims.  My work involved building the best case possible for each client.  In a similar vein, I currently serve as an expert witness for LGBT people coming to the U.S. from Mexico.  This helps me maintain a real-life perspective on my work.

I’ve spent quite a bit of time in Mexico working on my rhetoric project.  I find that taxi rides in Mexico are often very interesting because I always end up talking about my research, which inevitably leads to a conversation about how Mexico is seen through U.S. eyes.