Join us for a book club with Samba Baldeh, Wisconsin State Assembly Member, and Jerreh Kujabi, Madison- Kanifing Sister City Committee Chair, who will share contemporary stories about life in The Gambia.

Our speaker, Samba Baldeh, was recently sworn in as the Assemblyman of the 48th Assembly District of Wisconsin after serving three terms on the Madison Common Council representing Madison’s 17th District. He is the first alderman and Wisconsin State Assemblyman of Gambian descent. During his time as Alderman, Baldeh was appointed to Madison’s Sister City Committee and worked with the committee to establish the first Madison sister city relationship on the African continent.

Our moderator is Jerreh Kujabi, who serves as the chair of the Madison Kanifing Sister City Committee. Kujabi served as acting chair during the establishment of the Madison-Kanifing Sister City relationship established on May 17, 2016. The Madison-Kanifing Sister-City Committee serves as a community resource for cultural exchange between Madison Wisconsin and Kanifing (also to include other areas) in The Gambia. The goal of the collaboration is to foster mutual learning, respect, and humanitarian support while highlighting the rich cultures, strengths and lived experiences of citizens in both cities. The non-profit entity that operates locally within the municipality to coordinate with the sister city committee is FAWEGAM (Forum for African Women Educationalists-The Gambia Chapter).

Teachers should read One Plastic Bag: Isatou Ceesay and the Recycling Women of The Gambia by Miranda Paul before attending this online event.

“One Plastic Bag: Isatou Ceesay and the Recycling Women of the Gambia is a picture book that tells the story of the creative and determined women who brought beauty and prosperity back to the village of Njau, Gambia. It has been a named a Junior Library Guild Selection and received a starred review from School Library Journal in addition to a Children’s Africana Book Award notable and Green Earth Book Award Honor title.”

The first 25 Wisconsin K-12 public school teachers who register for this event will receive a copy of the book.

This event is co-sponsored by the African Studies Program, UW-Madison. REGISTER HERE. 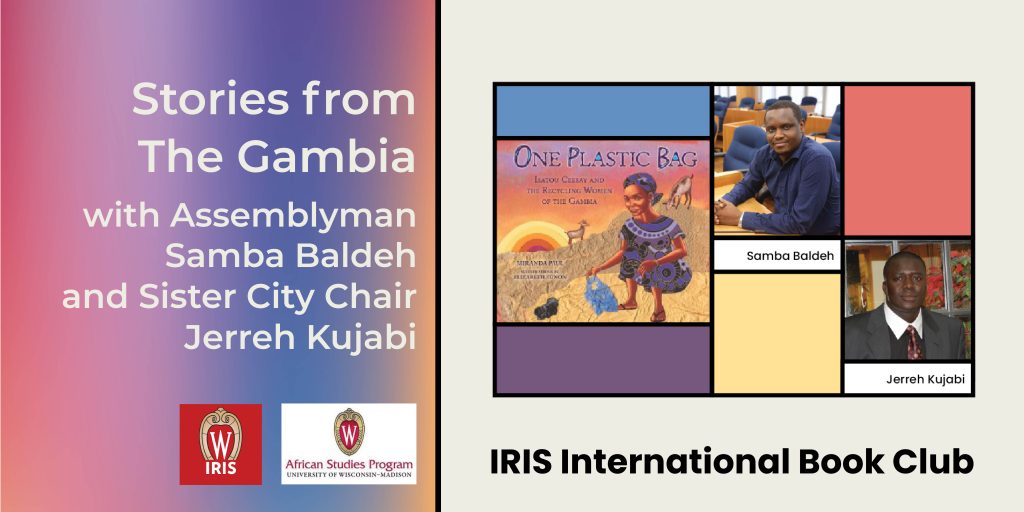