Russia-Ukraine: Perspectives from the East, West, and Global South 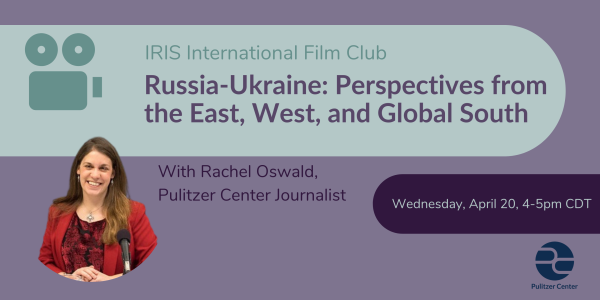 Join us for our online April Film Club with Rachel Oswald, a journalist and former grantee of the Pulitzer Center on Crisis Reporting. Rachel will discuss the current Russia-Ukraine war, and its impact on international relations – how the conflict is seen from the Global South, the credibility of international organizations like the United Nations, European Union and NATO, and the pressure on all countries to choose a side.

Our Film Club will feature the film The Death of Stalin, a 2017 political satire dark comedy film based on a French graphic novel; the film depicts the internal social and political power struggle among the Council of Ministers following the death of Soviet dictator Joseph Stalin in 1953. Participants are encouraged to watch the film prior to the event – you can stream the film on Amazon Prime, Roku, and YouTube.

Rachel Oswald is reporter for CQ Roll Call where she covers foreign policy through a legislative lens. She covers congressional oversight of the State Department, national security law, the foreign aid budget, nuclear treaties and proliferation, human rights concerns, and humanitarian crises. Rachel has reported from South Korea, Japan, Austria, Russia, Kazakhstan, and the Dominican Republic. She previously covered nuclear weapons issues for National Journal and is a past fellow of the Pulitzer Center on Crisis Reporting, the International Reporting Project, the Japan Foreign Press Center and the National Endowment for Democracy. Rachel is the chairwoman of the National Press Club’s Press Freedom Committee and is a graduate of George Washington University where she majored in Middle Eastern Studies.