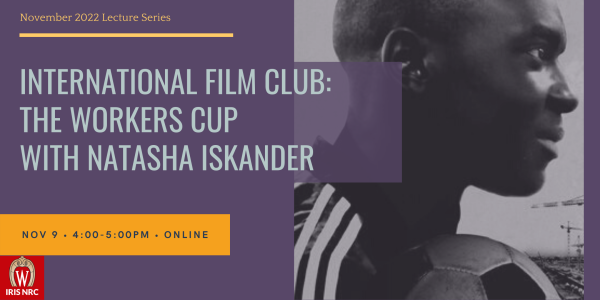 Join us for our November Film Club with Natasha Iskander, a Professor at NYU-Wagner, who recently published an acclaimed book examining the lives of migrant workers recruited to build the stadiums for the World Cup of 2022 in Qatar. The featured film is The Workers Cup. Natasha will draw on her research to deepen our understanding of issues of migrant labor and human rights in Qatar. The first 15 educators and 10 students to register will receive a copy of Natasha’s book, Does Skill Make Us Human?

Participants are encouraged to watch the Workers Cup before attending this online event. See the trailer here, and a list of where you can watch the movie at home here. If you are affiliated with UW-Madison and have a Net ID, you can access the film for free here.

Inside the labor camps of Qatar, African and Asian migrant workers building the facilities of the 2022 World Cup compete in a football tournament of their own: The Workers Cup.

In 2022, Qatar will host the biggest sporting event in the world, the FIFA World Cup. But right now, far away from the bright lights, star athletes and adoring fans, the tournament is being built on the backs of 1.6 million migrant workers. The Workers Cup is a feature-length documentary giving voice to the men who are laboring to build sport’s grandest stage. The film is a portrait of a handful of players on the [worker’s cup] team. It explores universal themes of ambition, aspiration and masculinity, as we see our protagonists wrangle hope, meaning, and opportunity out of dismal circumstances. The mundane is fraught with turmoil, whether it is changing jobs, talking with family back home, or going on a date. This results in a terrible toll to the psyche of our protagonists, as they are depleted of the hope that motivated them to come to Qatar in the first place.

Ultimately, our own complicated relationship with sport is revealed, as we see its power to unite and divide society by turns.

Natasha Iskander is Professor of Urban Planning and Public Service at New York University – Wagner Graduate School of Public Service, and conducts research on the relationship between migration and economic development. She looks at the ways that immigration and the movement of people across borders can provide the basis for the creation of new knowledge and of new pathways for political change. She has published widely on these questions, looking specifically at immigration, skill, economic development, infrastructure, and worker rights, with more than 40 articles and book chapters on these topics. Her first book, Creative State: Forty Years of Migration and Development Policy in Morocco and Mexico (Cornell University Press, ILR imprint, 2010), looked at the ways that migrant workers transformed the economic development policies of their countries of origin. It received the International Studies Association – Distinguished Book Award in Ethnicity, Nationalism and Migration Track and was a Social Science Research Council—Featured Publication. Her most recent book, Does Skill Make Us Human?: Migrant Workers in 21st Century Qatar and Beyond (Princeton University Press, 2021), examines the use of skill categories to define political personhood, in ways that have become increasingly salient with the hardening borders and the pressures of climate change. It received the 2022 American Sociological Association — Sociology of Development Best Book Award and the 2022 American Sociological Association — Labor and Labor Movements Best Book Award.