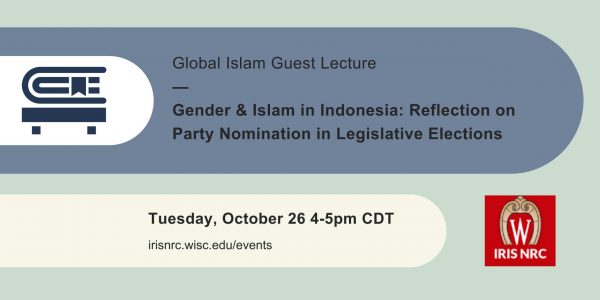 In this Global Islam Guest Lecture, Dr. Ella S. Prihatini (Lecturer, Department of International Relations, Binus University, Jakarta, Indonesia) will elaborate on the topic Gender and Islam in Indonesia: Reflection on Party Nomination in Legislative Elections. She will also unpack how women’s political status in contemporary Indonesia is progressing and will include insights from the pre-transition era. Elaborating on before and after Reformasi in 1998, Dr. Prihatini will discuss how gender and authoritarianism have shaped contemporary Indonesian politics.

Dr. Ella S. Prihatini is a Lecturer in the Department of International Relations at Binus University, Jakarta, Indonesia. Ella received her PhD in political science and international relations from the University of Western Australia (UWA), Perth, in mid-2019. Prior to joining Bina Nusantara University in March 2020, she was a teaching fellow at UWA (2017-2019) and a lecturer in the Department of International Relations at President University (July 2013-February 2015). Ella has also developed over 10 years of experience in journalism (2004-2015). She has received extensive data gathering and reporting training in various countries including Japan, Australia, Qatar, and the UK. One of her key achievements is exclusively interviewed President Hamid Karzai of Afghanistan during the commemoration of Asia Africa Summit in Jakarta (2005).