Problems of Authoritarianism and Underdevelopment in Muslim-Majority Countries with Dr. Ahmet Kuru 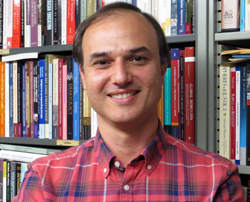 Ahmet T. Kuru will talk about his new book “Islam, Authoritarianism, and Underdevelopment: A Global and Historical Comparison” (Cambridge University Press, 2019). Why do Muslim-majority countries have high levels of authoritarianism and low levels of socio-economic development in comparison to world averages?

Kuru elaborates an argument about the ulema-state alliance as the cause of these problems in the Muslim world from the eleventh century to the present. Criticizing essentialist, post-colonialist, and new institutionalist explanations, Kuru focuses on the relations between intellectual, economic, religious, and political classes in his own explanation.

This lecture is offered as part of the Arabic, Persian, and Turkish Language Institute (APTLI) and is open to to students and the public.

Ahmet T. Kuru is Porteous Professor of Political Science at San Diego State University. Kuru received his PhD from the University of Washington and held a post-doc position at Columbia University. He is the author of award-winning Secularism and State Policies toward Religion: The United States, France, and Turkey (Cambridge UP, 2009). His 2019 book, Islam, Authoritarianism, and Underdevelopment: A Global and Historical Comparison (Cambridge UP) received the American Political Science Association’s International History and Politics Section Award. His works have been translated into Arabic, Bosnian, Chinese, French, German, Indonesian, Persian, and Turkish.