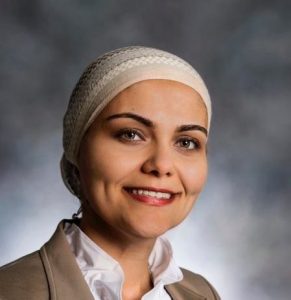 Marwa Shalaby is Assistant Professor in the departments of Gender and Women’s Studies and Political Science. Shalaby is the PI for the Governance and Elections in the Middle East Project (GEMEP)–the most comprehensive and only dataset that offers invaluable insights into the micro-dynamics of electoral institutions across the region. Her work was supported by Rice University’s Endowment on Women’s Rights in the Middle East, the Carnegie Corporation of New York, New York University Abu Dhabi Institute (NYUADI), Rice University’s Boniuk Institute, and the Issam Fares Institute for Public Policy (AUB).

Shalaby was quoted and/or interviewed by major domestic and international media outlets, such as CNN, Fortune Magazine, Al-Ahram (Egypt), and World Politics Review, among many others. She has also consulted with government agencies on several research projects related to women and politics in MENA. She has presented her work and organized conferences in the U.S. and the MENA region.

In April 2021, IRIS interviewed Professor Shalaby about her work.

IRIS: You are the PI for a project called Governance and Elections in the Middle East (GEMEP). The project has developed the most comprehensive and only dataset that offers invaluable insights into the micro-dynamics of electoral institutions across the region. What have you learned from your analyses of this database?

MS: I initiated the GEMEP project in 2014 to better understand the legislative behavior of politicians in parliaments operating under autocratic rule in the Arab world. Analyzing the legislative behavior as well as the monitoring/oversight role of legislators sheds light on the importance of the institutional context in shaping their policy preferences and priorities. In one of my papers, I show how parliamentarians in Morocco tend to be fairly responsive to their constituents, yet they avoid bringing up topics that are sensitive to incumbent regimes, such as corruption and minority rights (Shalaby and Aydogan 2019). Another project demonstrates how women tend to be marginalized from accessing influential legislative committees in Arab parliaments with no gender quota in place (Shalaby and Elimam 2020). My research also highlights the patron-client relationship prevalent in these legislatures as well as the incumbent regimes’ strategies to coopt and manipulate existing opposition factions, especially the Islamists.

IRIS: In your opinion, what are the big takeaways from studies of the Arab Spring?

MS: I think the Arab Spring had pretty modest outcomes, but this doesn’t mean that the Arab Spring failed. The original demands of the uprisings continue to be unfulfilled; calls for political and civil freedoms, better economic conditions, enforcement of rule of law and eradicating corruption still need to be realized. Unfortunately, the pandemic has only worsened the existing conditions. Right now, regimes in resource-poor countries like Egypt, Jordan, and Morocco are silencing these demands by introducing piecemeal reforms or using coercive force and repression to silence opponents. Oil rich monarchies are bumping up the subsidies and public sector employment and incentives to appease citizens and buy their loyalty, but this is unsustainable. These uprisings are far from over, and the next wave of protests will take us by surprise just like the first wave of uprisings did.

IRIS: You have consulted with government agencies on several research projects related to women and politics in the Middle East and North Africa (MENA). What sorts of projects have you worked on?

MS: I consulted with agencies mainly about promoting the presence of women in politics in the Arab world. As you may know, until the first decade of the 21st century, the Arab world continued to have the lowest rate of women’s representation in national legislatures. Female representation in national legislatures stands at 18 percent in 2021, compared to 5 percent in 2000. It is worth emphasizing that the scene has significantly changed since the onset of the Arab uprisings. There have been important changes in recently years, with the introduction of the mandatory gender quota in Algeria, the expansion of the party lists in Morocco in 2011, the enactment of the provisional quota system in Egypt’s 2015 elections, and the recent constitutional reforms in Tunisia mandating gender parity in all legislative bodies. My work with international and regional organizations aims to capitalize on this momentum to further advance the presence of women in positions of political leadership.

IRIS: What’s the focus of your current research?

MS: I am currently working on a book manuscript explicating the role of women in Arab parliaments. I am also working on another project focusing on women’s representation in local politics in Morocco and Turkey. Additionally, I am starting a new collaborative project on the legislative behavior of Islamists in the Jordanian lower chamber over the past decade by analyzing the monitoring role they perform. Finally, my recent work focuses on the impact of the COVID-19 pandemic on female academics’ research productivity–both in the U.S. and the MENA region. I have published several pieces drawing attention to this important topic and I plan to continue disseminating the findings and raise institutional awareness on the disproportionate burden of the pandemic on female faculty, especially those with young children.

IRIS: How do you incorporate your research in the courses you teach at UW Madison?

MS: At UW-Madison, I teach classes such as Gender and Politics in the Middle East and North Africa, Middle East and North Africa Politics and Governments, and Gender, Islam, and Society. I always bring in research and insights from my own fieldwork on the most pertinent topics relating to the study of the MENA region and provide the students with a nuanced understanding of the politics and gendered power relations throughout the region. In Fall 2021, I will be teaching a class on gender and authoritarian politics that will incorporate scholarship from different regions of the world in order to enrich the students’ understanding of the institutional variations across democratic and non-democratic contexts and their impact on structuring gender power relations.