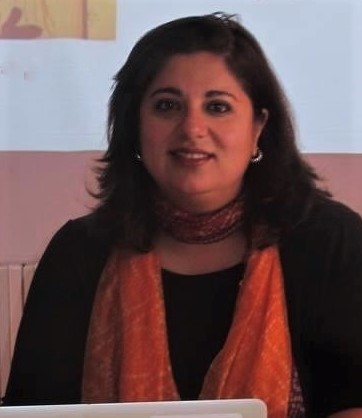 Nevine El Nossery is the Associate Professor of African Cultural Studies and Francophone Studies, and Director of the Middle East Studies Program. She is also an affiliate faculty member in the department of Gender and Women’s Studies, Middle East Studies and African Studies Program. Her research interests include Francophone Literatures and Cultures (with a focus on North Africa and second and third generations’ cultural production in France); Postcolonial Studies; art and politics; Middle Eastern Literatures and Cultures.

In April 2021, IRIS interviewed Professor El Nossery about her forthcoming book, Arab Women and the Poetics of Revolution. Their conversation is recorded below.

IRIS: Your forthcoming book Arab Women and the Poetics of Revolution examines women and art related to the Arab Spring. What can you tell us about representations of women in this corpus?

Dr. Nevine el Nossery: My book examines the ways in which women in the MENA region, during the recent periods of political turmoil, have contributed to the intellectual and cultural discourse on revolution through creativity as a vehicle for resistance, contestation, and change. If the Arab uprisings did not bring about real socio-political change, they nevertheless created an environment that is increasingly favorable to women’s participation in collective action and the public sphere. More resolved to openly handle topics that were formerly considered taboo, women have deployed innovative—often unconventional—forms. This is not to suggest that female artists were apolitical before the Arab Revolutions; rather, I show how certain historical events and predicaments also drove the politicization of not only artists but even their audiences, thereby reconfiguring social, political, economic and cultural relationships worldwide. Ultimately, it is clear that the collective “consciousness” of these artists, as well as their place and role in society, has evolved in a common revolutionary habitus, which continues to nourish revolutionary movements worldwide.

IRIS: What’s the core argument of the book?

NeN: I mainly argue that, thanks to the Arab uprisings, the world has witnessed what I am tempted to call a parallel revolution—an underground, interstitial, artistic flourishing led by women. This parallel revolution has developed ingenious approaches for mobilizing popular consciousness, constituting powerful stimulants for contesting existing dictatorial regimes and demonstrating what Hamid Dabashi calls a type of delayed defiance. In particular, the book addresses non-conventional expressions, encompassing multiple artistic forms and genres such as graffiti, street performance, photography, photo-texts, and comics.

IRIS: Tell us a bit about the global perspectives in Arab Women and the Poetics of Revolution.

NeN: My book aims to show that the Arab Uprisings are part of a global revolutionary movement. The year 2011 represents a decisive moment in contemporary history, if not the most important moment in the history of the Arab world. A multitude of revolutionary movements subsequently rose up against autocratic regimes, from Tunisia to Hong Kong, in addition to countries such as Egypt, Yemen, and later in Algeria, Jordan, Libya, Morocco, Syria, and Sudan. Similar events occurred in Europe as well—in Greece, Spain, and England—and in the Americas, in the U.S., Bolivia, Chile, and Colombia. More recently, in the U.S., the killing of George Floyd sparked protests worldwide against police brutality, as well as against all forms of racism and inequality. In cities such as Jerusalem, or Idlib in Syria, artists painted murals of George Floyd. The hashtag #BlackLivesMatter was widely shared on Egyptian social media, and Minneapolis has been compared to Sidi Bouzid, the Tunisian city where the Jasmine Revolution began after the self-immolation of a street vegetable vendor, Mohamed Bouazizi. Although there are clear differences between the Arab Spring and the American Summer, this energy of protest in the U.S. quickly recalled the revolts that spread throughout the Arab world almost a decade ago. The perpetuation of these singularities was indispensable in communicating horizontally with other singularities, and thus building multitudes (as Michael Hardt and Antonio Negri would say). Through a comparative lens, the book examines several artistic manifestations from Egypt, Tunisia, Algeria, and Morocco. Juxtaposed, these are seen to be interlinked with each other and, by extension, to other manifestations on a global scale. My book is based on this dynamic synergy of the multitude.

IRIS: Which specific works of art do you feature in your book, and why?

NeN: The goal of the book is to showcase the diverse voices of contemporary women artists through an interdisciplinary perspective. These include Egyptian artists such as the graffiti artist and art historian Bahia Shehab; street performances such as Rania Refaat’s puppet theater, the revolutionary stories told by the feminist group El Batt Eleswed (The Odd Ducks), or Yasmine El Baramawy and her lute performances in the streets of Cairo; the Tunisian photographer Héla Ammar; the Moroccan activist and comic strip illustrator Zainab Fasiki; the French-Algerian writter Kaouther Adimi; and the Tunisian writer and academic Dora Latiri.

How do women question, subvert, and reimagine art amidst revolutionary moments? This is the question that guides the book.

IRIS: How do you infuse your research into the courses you teach at UW?

NeN: Through my research in general, I am interested in examining the various interstitial spaces where languages, genres and viewpoints intertwine, reflecting the (im)balance of power that can exist between societies, states and people in postcolonial settings. I bring these ideas to the classroom, a place I conceive as a space where all differences can be discovered, excavated and come to the forefront. For the last fifteen years of my life, I have been bringing students into the worlds of Francophone and Arabic literatures and cultures. The material I teach take the students to unfamiliar places, show them different ways of living and even dreaming. These experiences, both distinct from their own and yet, similar, enhance their ability to bridge cultures and to go beyond trivial differences. But it also allows them to better understand and discern the world that surrounds us, and to look anew at it with fresh eyes. Reading foreign works can expand their horizons of thinking and fill the void when answers are evasive; it brings nuances to their perspectives, might alter their views, and challenge the ideas they take for granted. At the end, my Wisconsin students would become global citizens who can recognize and accept differences rather than seek sameness.

IRIS: Thank you so much for taking time to share your work with us! I look forward to reading your book.